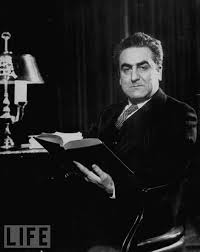 The Armenian General Benevolent Union (AGBU) collaborated with Notre Dame University-Louaize (NDU) to organize an online seminar commemorating the late Dr. Charles Malik—the person, the professor, and the diplomat who co-authored the Universal Declaration of Human Rights. This document is considered the most important international declaration of the 20th century.
The globally attended seminar, which took place on Wednesday, November 4, 2020, was divided into two main panel discussions, moderated by Mr. Tony Nasrallah from the offices of the Charles Malik archive at NDU. It houses a massive collection of Dr. Malik’s papers and also co-publishes various works by and about him, in an effort to spread and reinforce his remarkable legacy.
Opening remarks were given by Father Pierre Najem, President of NDU, and Mr. Berge Setrakian, President of AGBU.
Father Najem emphasized the importance of Dr. Malik’s works for Lebanon and for the world. Mr. Setrakian noted that the world has been witnessing the slow but constant disintegration of the values and ideas that Dr. Malik had advocated.
“The existence and future of minorities in the Middle East are currently at stake,” Mr. Setrakian observed, referring to the present-day challenges to human rights and freedom of speech.
He also pointed out how the international community remains silent in the face of a real threat of a second Armenian genocide resulting from the war in Artsakh perpetrated by Azerbaijan and how this was the time for world powers to invoke the principles and values espoused by Dr.Malik.

The second speaker Reverend Dr. Habib Badr, a professor of Church History at NEST, talked about Charles Malik The Mentor. They shared many memories together as Dr. Malik was his uncle; his aunt’s husband.
“He was the person who most influenced, guided, and shaped my spiritual, cultural, and intellectual formation”,
said the Reverend. He also stressed that the Bible played a very essential role in Malik’s life

.Panel 2: Charles Malik The Diplomat
This panel started with a video produced by AGBU Lebanon, which showed Dr. Malik’s educational and career paths, as well as his great achievements. It is worth noting that Dr. Malik was one of the youngest delegates to sign the United Nations Charter.
The first speaker H.E. Ambassador Farid El Khazen, Ambassador of Lebanon to The Holy See, stated that Dr. Malik’s interest in diplomacy and politics was only temporary, as Dr. Malik the philosopher-diplomat prevailed over Malik the diplomat-philosopher. Amb. Khazen went on to mention that Dr. Malik had three interlocking endeavors, which were history-making, history-writing, and history-interpreting. When it comes to his take on International Relations and the character of the Diplomatic function, Dr. Malik opted for the idealist theory without dismissing the realist theory, which, in general, are two contrasting theories.
The second and final discussant Dr. Samuel Moyn, a Professor at Yale University, talked about Charles Malik and Personalist Human Rights.
“Dr. Malik was more studied during the last 20 years, when the origins of the Universal Declaration were reexamined”, said Dr. Moyn.
Moreover, Dr. Moyn referred to remarks and lessons learned from scholarly writings about Dr. Malik that reveal Dr. Malik’s philosophical origins, and his unique vision of Human Rights which he embraced in the 1940s, drawn from Christian tenets. The last lesson was how the rest of history around Human Rights made it difficult to sustain Dr. Malik’s own way of thinking about them. Consequently, he placed the right to think and believe at  the center of Human Rights. All of these factors, Dr. Moyn maintained, make Dr. Malik a leading figure of his times.
After the discussion, a few minutes were dedicated for questions from the international audience of attendees.