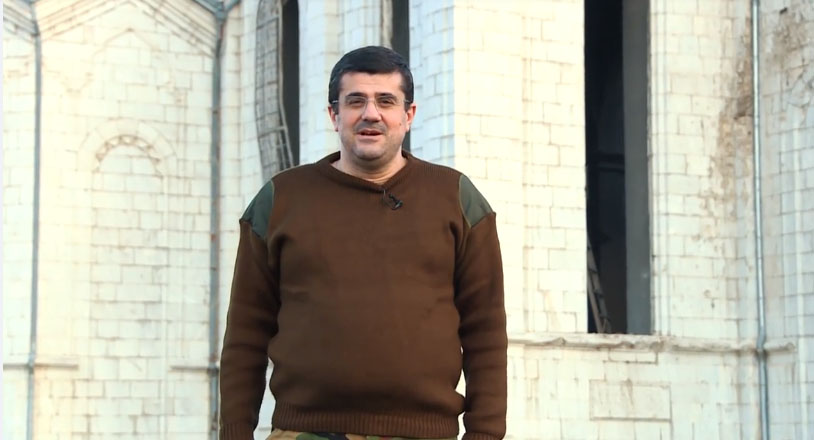 YEREVAN, OCTOBER 29, ARMENPRESS. President of Artsakh Arayik Harutyunyan addressed the nation from Artsakh's Shushi city, where the President emphasized that a breakthrough must be made on the frontline. President Harutyunyan underlined that he believes in the victory of the Armenian people and urged to unify, fight and punish the enemy. ARMENPRESS presents the address of Arayik Harutyunyan.

''Dar compatriots, sisters and brothers, ny friends in Artsakh, Republic of Armenia and the Diaspora,

Like in 1992, when our triumphal march kicked off by the liberation of Shushi, today our victory is conditioned by the protection of Shushi. The enemy is just a few kilometers from here, maximum 5 kilometers.

And the main goal of the enemy is to occupy Shushi. There is a saying who controls Shushi, he controls Artsakh. And I want us to understand this point, understand not just by words, but directly participate in the protection of Shushi. For the first time in my life I was in Shushi on May 8, 1992 and was among the first ones to enter Ghazanchetsots Church and kiss the cross and I prayed and lit a candle for our victory. In reality, I believe in our victory, and I believe that these days will be a turning point. For that goal we have to unite, we have to fight and punish the enemy. But for that it's also necessary to reach Artsakh as soon as possible. Of course, this speech is not intended for panic, just the oppositie. I again reiterate, I believe in our victory. And we have to make a breakthrough in the front line within the days and have to punish the enemy just near the gates of Shushi. Let's unite and fight together. Of course, we understand and comprehend everything, but let's carry out our greatest mission, for the sake of the Motherland, our future and our generations. The victory must be our, be confident, I believe in our victory'', Harutyunyan said.

Today, in this decisive historical moment, when the Turkish-Azerbaijani and terrorist gangs, using their entire military resources, undertook an offensive at Artsakh, aimed at extermination and exile of all Artsakh Armenians, who have been living on their native soil for millennia, from their Homeland, we carry on a life and death struggle, in unequal conditions in every respect.
Now they threaten our Homeland and our existence not only along the entire frontline, but have also invested serious military resources in the direction of Shoushi, in order to capture the proud Armenian town-fortress at any cost.
Shoushi is not just a town, it is the symbol of the determination of the Armenian people to live in their own cradle, a symbol of the victories of the Armenian people. Shoushi is the beating heart of all Armenians.
As a Supreme Commander-in-Chief of Artsakh, I once again call on each and every one of you to unite and defend our Shoushi, our Artsakh, our national dignity''.
Más leídas