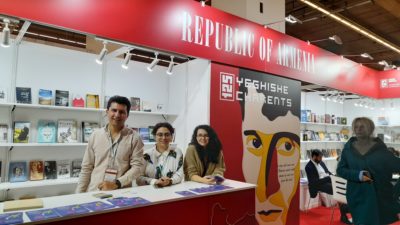 FRANKFURT — The Frankfurt Book Fair, the largest and most important worldwide, is something I look forward to every October. This year, after two years of limitations imposed by the Covid pandemic, the fair opened as an in-person event, and people came in droves. Though the numbers still do not reach those of pre-pandemic years, there were a good 4,000 exhibitors from 95 countries and 180,000 visitors. In the first two days, reserved for trade visitors, there were 93,000 in attendance, and from Friday to Sunday, that figure was augmented by another 87,000 private visitors.

“Translate, Transfer, Transform” was the theme this year, and it could not have been more appropriate. In these times of strategic crises and war, we need more than ever to enhance communication, speak the language of others and, through fruitful exchange of ideas, contribute to transforming a suffering world.

It came as no surprise, then, that the Armenian Ministry of Education, Science, Culture and Sport set up a stand dedicated to the art of translation, not in the abstract, but very much in the concrete. The spacious stand bore the name and image of Yeghishe Charents, in commemoration of the 125th anniversary of his birth. And featured among the many books on display were translations of his works into various languages: among the new editions appearing this year are those in English, French and Italian.

I spoke to Armen Sargsyan, a senior specialist in the field of literature from the Ministry in Yerevan, his colleague, Tatev Sukiasyan, and Astghik Saribekyan, an Armenian living in Germany who was volunteering her services to translate for German guests. Sargsyan pointed to the various new translations of Charents’ works, and then took one special book down from the shelf to show me. This anniversary edition contains the most famous work by the beloved Armenian poet, “Yes Im Anoush Hayastani” (“My Sweet Armenia”). The deluxe edition contains the poem as translated into 35 languages. Illustrations by artist Martiros Sarian grace the pages. Charents’s granddaughter, Gohar Charents, organized the ambitious translation project which was presented in 2019. In her introduction, she quoted Sarian’s praise of the literary masterpiece as a “panoramic portrait of our ancient country … both a prayer and an oath … a hymn to freedom.”

What better way to celebrate the anniversary of Charents’ birth than with a deluxe edition of translations that make his monumental poem available to the readers of the world? But it is not only the translations honoring the achievements of this great Armenian poet that are noteworthy. Publishing houses in Armenia have been active over the last 20 years, and in the last four years have concentrated efforts on a project to promote translations. The aim is to make Armenian classical and contemporary literature available in modern translations to a worldwide readership. To date, a good 70 books in over 20 languages have been published.

The “Armenian Literature in Translations” program launched by the Ministry, I read in a brochure, “aims to ensure that the best of Armenian prose, poetry, drama, journalism, and children’s literature is accessible and known beyond the borders of Armenia.” Under the program, financial support is available to foreign publishers who will produce books of Armenian literature in translation.