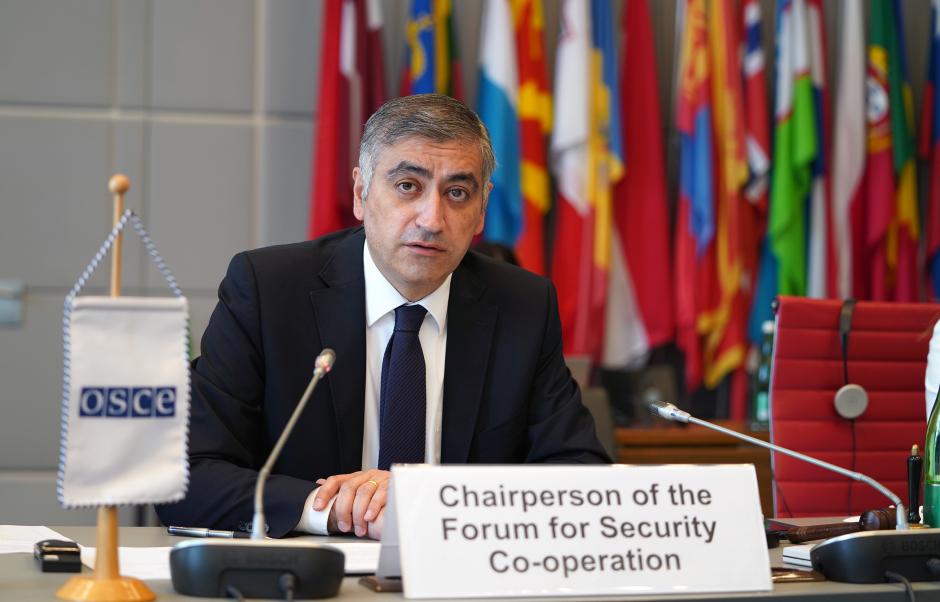 Under the motto, ‘rebuilding trust and confidence through implementation of politico-military commitments’, the Armenian FSC Chairmanship has sought to implement and protect OSCE commitments to prevent further erosion of European Security, said Armen Papikyan, the Chair of the Forum for Security Co-operation (FSC), during his remarks at the last FSC meeting under the Armenian FSC Chairmanship.

“We assumed the Chairmanship following a year when peace and security were challenged in the OSCE area of responsibility,” Papikyan said.  “Over the past three months we made significant efforts to promote the Forum as a key platform for a meaningful, genuine and open dialogue by discussing issues of major concern.”

He provided an overview of the activities organized by Armenia since it took over the FSC Chairmanship in April. These included nine security dialogues that addressed a range of topics including compliance with international humanitarian law, United Nations Security Council Resolutions 1540 and 1325, the challenges of new generation warfare, arms control and disarmament, transparency in military exercises, small arms and light weapons and stockpiles of conventional ammunition, and preventing and combating terrorism in all forms.

Outlining challenges faced during the FSC Chairmanship, Papikyan described a “fragmentation” of the OSCE area and European security and “a disproportional attention towards different conflict and crisis situations in the OSCE area”. He also noted the erosive effect of an increase in disagreements among participating States on the conventional arms control regime and confidence- and security-building measures. “Deliberations in the FSC during the Armenian Chairmanship showed that these factors continued to challenge the security and stability in the OSCE area,” he added.

Sharing a vision for rebuilding trust and confidence in the future, Papikyan called for a “genuine dialogue in the spirit of Helsinki”, for renewing respect for shared OSCE principles and commitments and for reinvigorating co-operation.

“No matter how important OSCE political military commitments and obligations may look on paper, they cannot ensure security and confidence without the political will of the participating States,” he said. “Current security crises demand not words but actions. Commitments are a means to an end and not an end in itself. They are the reflection of the political will of participating States to address security challenges.”Papikyan closed the session by thanking the Swedish 2021 OSCE Chairpersonship, the FSC Troika and OSCE staff for their support and reaffirmed Armenia’s readiness to work closely with Austria as the incoming FSC Chairmanship