Hundreds of Syrian mercenaries allied with Turkey have flowed into Nagorno-Karabakh, further straining relations between Ankara and Moscow 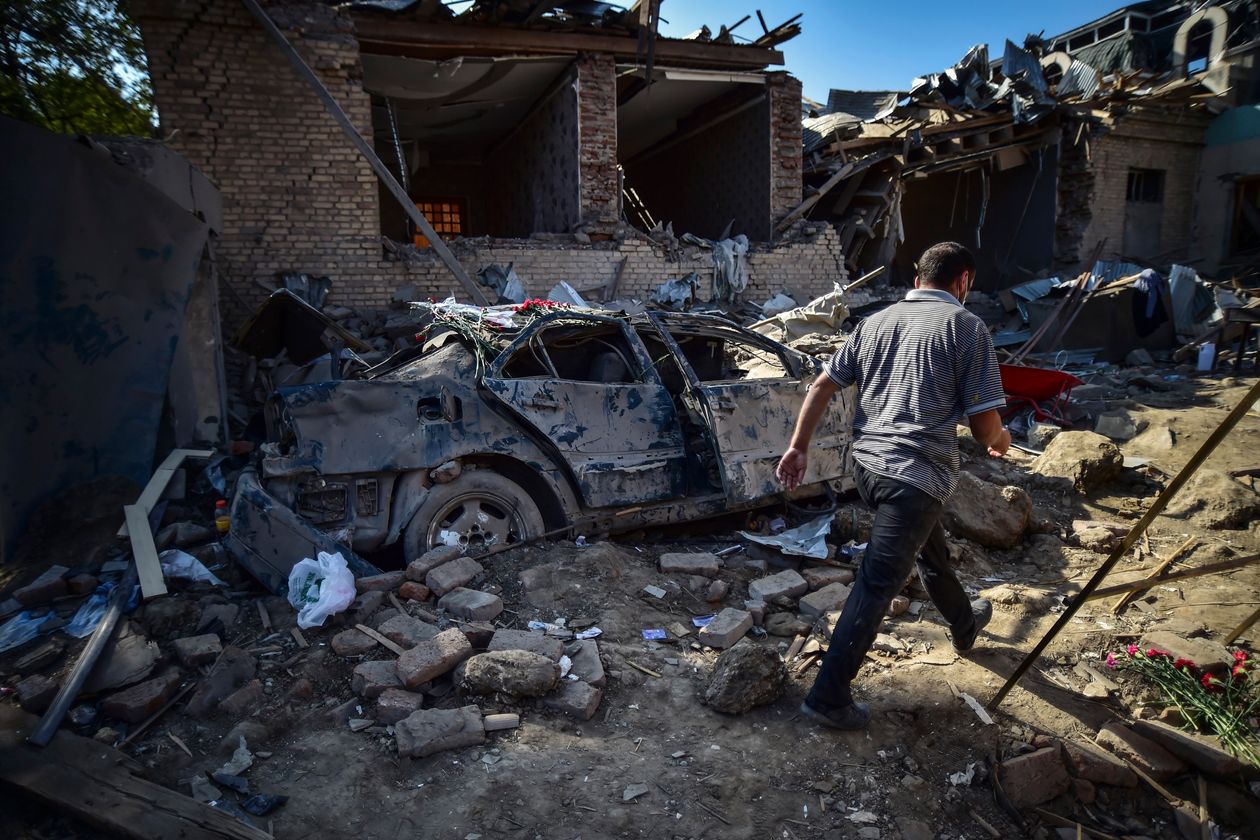 Hundreds of fighters from Syrian militias allied with Turkey have joined the fighting between Azerbaijan and Armenia over the disputed enclave of Nagorno-Karabakh, and hundreds more are preparing to go, according to two Syrians involved in the effort.

Turkey quickly declared its support for Muslim-majority Azerbaijan, whose people speak a Turkic language, in the escalating conflict between two former Soviet republics near the border with Russia—an area in which Moscow has historically been the dominant influence.

On Monday, Russian Defense Minister Sergei Shoigu raised the issue of Middle East fighters in a phone call with his Turkish counterpart, Hulusi Akar. And on Tuesday, Russia warned of the possible “transfer of terrorist fighters” from the Middle East to Nagorno-Karabakh.

A senior Turkish official rejected claims that Ankara was involved in sending Syrian fighters to the Caucasus. “Those claims, which are intended to distract attention from Armenia’s 30-year occupation of Azerbaijan’s sovereign territory, are not true,” the official said.

Azerbaijan and Armenia have been fighting intermittently for three decades over Nagorno-Karabakh, a province populated and controlled by ethnic Armenians but internationally recognized as a part of Azerbaijan. A truce between Armenia and Azerbaijan brokered by Russia on Saturday has failed to stop the fighting, with each side accusing the other of violations. Officials from both sides said dozens of civilians had been killed and scores wounded since the conflict erupted last month.

After skirmishes first flared in Nagorno-Karabakh in July, word spread among Syrian rebel factions that Turkey was enlisting fighters to go fight in the enclave, according to four people with direct knowledge of the sign-ups.

A Syrian rebel involved in deployments said fighters had been traveling there since mid-September—before the latest round of clashes—in groups of up to 100 at a time. Another Syrian with ties to the rebel groups also estimated hundreds had gone. Dozens have also returned, alarmed by the fierce fighting, that person said.

Turkey organized two weeks of land and aerial military drills in Azerbaijan after the July skirmishes and supplied the Azeri government with attack drones, according to Turkish officials. Azerbaijan’s president, Ilham Aliyev, has said the Turkish aircraft has given his country’s military an edge in the Nagorno-Karabakh fighting.

Turkey has enlisted Syrian fighters to advance its foreign-policy objectives before. Earlier this year, Ankara sent about 5,000 Syrian fighters to support the internationally recognized government in Libya’s civil war, according to a June report released by the U.S. Defense Department.

By sending the Syrians, as well as deploying its own soldiers, Turkey increased its influence in negotiations over the outcome of the conflict in the oil-rich North African country. It also put itself at odds with Russia and some Arab states that support opponents of the United Nations-backed government in Tripoli.

Moscow and Ankara, which also intervened on opposite sides of the conflict in Syria, each aspire to the role of regional power broker and have used mercenaries to advance their goals. Turkey’s assertiveness on Nagorno-Karabakh, however, has been seen in Moscow as an intrusion into an area it has regarded as firmly in its sphere of influence.

The Syrian rebel, who has been charged with preparing spreadsheets of men enlisting to go to Nagorno-Karabakh, said many were lured by monthly salaries of up to $2,000—a significant sum in the war-wrecked economy of Syria.

“Going to Libya or to Azerbaijan has become a normal thing,” said the fighter, who added that he briefly considered signing up himself because he struggles to support his family.

Armenia-Azerbaijan Conflict: Behind the Fighting in Nagorno-Karabakh 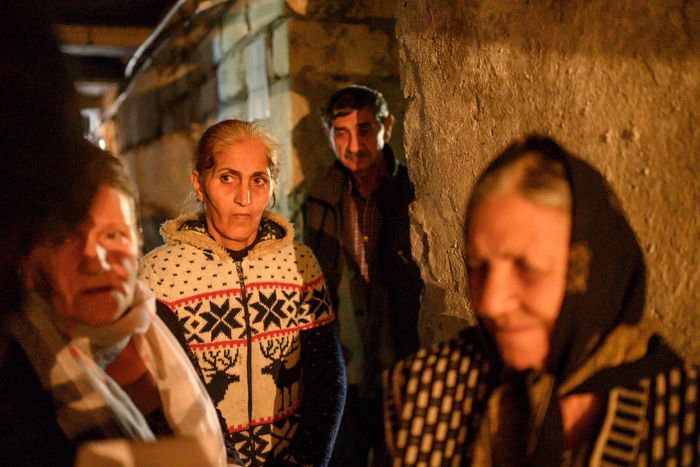 People sheltered in a basement in the city of Terter, Azerbaijan, on Tuesday. BULENT KILIC/AGENCE FRANCE-PRESSE/GETTY IMAGES

“People no longer care who they are fighting with or against, now all they ask about is the money,” he said. “Wherever there is money they will go.”

Turkish President Recep Tayyip Erdogan has praised Syrians fighting in Libya under the supervision of Turkish military advisers. “These brothers who are with us consider this togetherness an honor for themselves,” he said in February. “There is a spiritual dimension for them in going [to Libya].”

Russia has deployed private military contractors from Russia as well as Syrian militiamen to back its favorite in the Libyan fight, Khalifa Haftar, according to European and Libyan officials.

Turkey has backed Syrian rebels fighting against the regime of President Bashar al-Assad since the early days of the war, including at one point jointly running a program with the U.S. to train and equip the rebels.

But after the U.S. and other Western and Arab allies pulled support from the faltering rebels, Turkey became their last remaining benefactor. It still provides salaries to fighters in various rebel factions allied under the umbrella of what they call the National Army.

“No one but Turkey is supporting” us, said one rebel commander. “So just like Turkey reinforced us and supported us in Syria…why should we not stand with it and help it in any other place?”

Last month, a 38-year-old Syrian rebel signed up to fight in Azerbaijan, motivated by the promised monthly salary of $1,500.

“We’re being sent to our deaths,” said the man. “But in the end we care about providing bread for our families.”

The rebel, who said he was waiting to be deployed to Nagorno-Karabakh, plans to cross from Syria into Turkey, where he said chartered flights transport the fighters to Azerbaijan.

One Syrian who has long worked with the rebel groups and who has been in direct contact with two Syrian men fighting in Azerbaijan said he has been told that casualties among the Syrian fighters are rising fast.

“They say it’s hell,” said the man, who added that as many as 200 have already asked to return. “Those who have gone there and not been killed or injured in some way are the exception. Some of the fighters already want to come back.”

Officials on both sides have described an extremely brutal conflict, in which civilians have been hit by artillery fire and airstrikes, while soldiers have had to hunker down in muddy trenches reminiscent of World War I.

Armenia has said that 429 of its soldiers had been killed in the fighting so far. Azerbaijan hasn’t disclosed how many of its troops have been killed.

On Tuesday, officials in Nagorno-Karabakh said Azeri forces had bombed civilian sites. Meanwhile, the Azeri government said that Ganja, Azerbaijan’s second-largest city, was targeted for a second time. The Azeri Defense Ministry said its forces are abiding by the truce.

—David Gauthier-Villars in Istanbul and Ann Simmons in Moscow contributed to this article.

Write to Raja Abdulrahim at raja.abdulrahim@wsj.com