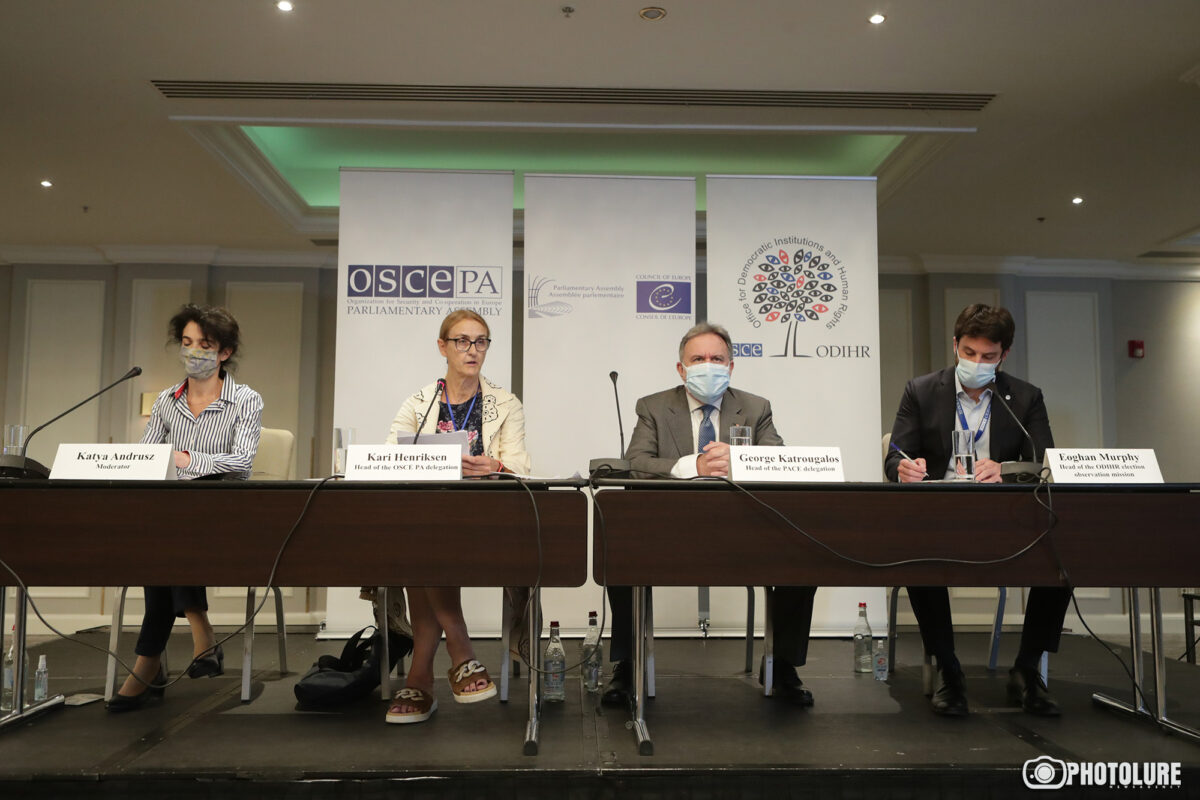 Armenia’s early parliamentary elections were competitive and well-managed within a short time frame. However, they were characterized by intense polarization and marred by increasingly inflammatory language from key contestants, as well as by the sidelining of women throughout the campaign, international observers said in a statement today.

The joint observation mission from the OSCE Office for Democratic Institutions and Human Rights (ODIHR), the OSCE Parliamentary Assembly (OSCE PA), and the Parliamentary Assembly of the Council of Europe (PACE), concluded that the electoral legal framework is generally comprehensive, but some shortcomings still remain. The observers noted that while recent changes in the electoral system were broadly debated and supported by the majority of political parties and civil society groups, the fact that amendments were adopted so close to the elections caused legal uncertainty and left little time to implement the new rules or inform voters about the changes.

“Despite the limited time for the implementation of the recent amendments to the electoral code, the administration of the elections was positively assessed by the majority of our observers,” said Margareta Cederfelt, Special Co-ordinator and leader of the short-term OSCE observer mission. “Most of our observers also assessed election day positively, up to and including the vote count.”

National security issues dominated the political discourse in the pre-campaign and campaign periods. However, the debate was driven by increasingly aggressive language and accusations, worsening the high degree of polarization and further reducing attention to political programmes and policy.

Election day itself was generally peaceful, and observers made an overwhelmingly positive assessment of the voting processes in the polling stations visited. However, many polling stations were inaccessible for voters with disabilities, and there was frequent overcrowding. There were also some cases of interference in the voting process by party or alliance proxies. At the same time, observers found that the vote counting process went well and was highly transparent.

The deep polarization didn’t detract from a well-run election,” said George Katrougalos, Head of the PACE delegation. “It is to be hoped that the results will be accepted by all parties across the political spectrum, and the harsh rhetoric of the campaign will be consigned to history.”

During the brief campaign period, candidates were able to campaign freely, and the fundamental freedoms key to democratic elections were generally respected. Observers noted that in some cases there was pressure on workers in both the private and public sector to take part in specific campaign events, while allegations of vote buying and the misuse of state resources continued throughout the campaign period. Despite the fact that women candidates were included in the party lists, observers noted that their visibility during the campaign was markedly low.

“While the recently introduced electoral changes have resulted in larger representation of women in the candidate lists, they remained largely absent from the public discourse during the campaign,” said Kari Henriksen, Head of the OSCE PA delegation. “It is important that women are not just equally represented, but are also given the opportunity to engage actively in public and political life.”

Freedom of expression is guaranteed by the constitution. However, cases of journalists being harassed in the course of their duties raises questions about respect for media freedom. The observer mission’s media monitoring found that several media outlets made a visible effort to cover a wide range of contestants, organizing debates that helped ensure voters had enough information to make an informed choice on election day. At the same time, there are long-standing concerns about the political affiliation of private broadcasters.

“All candidates could campaign freely throughout the election process, and it was good to see the election authorities deliver on their mandate professionally,” said Eoghan Murphy, Head of the ODIHR election observation mission. “But the antagonistic language we heard during the campaign was not in any way constructive for an informed public debate.”

The international election observation mission to the Armenian parliamentary elections totalled 341 observers from 37 countries, composed of 249 ODIHR-deployed experts and long-term and short-term observers, 71 parliamentarians and staff from the OSCE PA, and 21 from PACE.