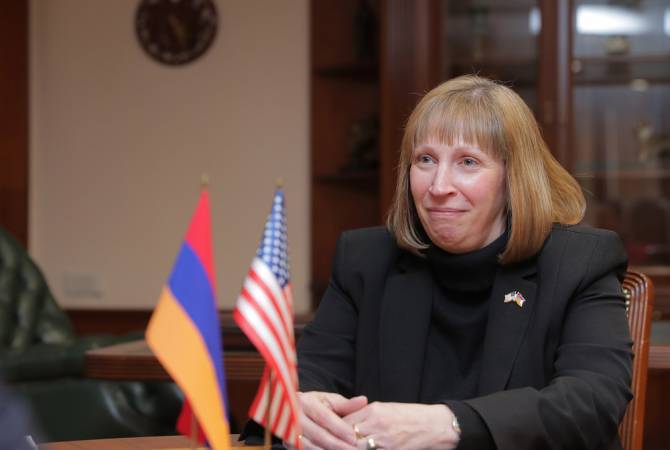 Lynne M. Tracy, U.S. Ambassador to Armenia  has published an article titled “Democracy is Precious” where she says that the United States “renews its commitment to partnering with the Armenian people, Government, civil society, media, and the private sector to support the aspirations of the Armenian people who voiced their choice for meaningful, tangible reforms to strengthen the institutions of Armenia’s democratic institutions and for a more prosperous future”.

“On January 20, 2021 just before 12:00pm in Washington, D.C., President Joseph R. Biden, Jr. took the oath of office to become the 46th President of the United States. His Vice President, Kamala Harris, was also sworn in, becoming not only the first woman, but also the first Black and Indian American to hold the office.

In his inaugural address, President Biden said of the moment, “We've learned again that democracy is precious. Democracy is fragile. At this hour, my friends, democracy has prevailed.” As we have seen over the last few weeks, and as President Biden emphasized, democracy cannot be taken for granted, even after nearly two and a half centuries in the United States.

Since Armenia’s independence, the United States has supported Armenia in its fight for democracy – not because we have perfected it ourselves, but because we know how much work it takes to protect and defend. Critical to this task are building and maintaining strong democratic institutions and advancing the rule of law, providing economic opportunity for all, and broadening access to education. It is a process that demands unity, resolve and perseverance, often in the face of enormous challenges.

As the United States begins a new chapter in our own country’s history, we renew our commitment to partnering with the Armenian people, Government, civil society, media, and the private sector to support the aspirations of the Armenian people who voiced their choice for meaningful, tangible reforms to strengthen the institutions of Armenia’s democratic institutions and for a more prosperous future.

Democracy and the rule of law are cornerstones of the U.S.-Armenia relationship, but we have an even broader common positive agenda. Supporting sustainable and inclusive economic growth, expanding trade and investment, promoting energy security, managing environmental resources responsibly, fighting the COVID-19 pandemic, and investing in people through educational opportunities reflect a deep and wide U.S.-Armenia partnership that I am confident will continue to strengthen.

Above all, we recognize the urgent work to be done in moving forward following the devastating conflict over Nagorno-Karabakh. The U.S. government has responded to Armenia’s critical needs by providing clothes, food, child-friendly safe-spaces, and shelter to displaced peoples. The United States continues to call for the swift and safe return of the remaining detainees. We condemn the acts of atrocities connected with the conflict. Those responsible must be held to account. And, while the fighting has stopped, the need for an enduring political solution on the status of Nagorno-Karabakh is essential for securing regional peace and stability.

As I look ahead to the upcoming year, I acknowledge the many challenges we still face. But I am confident that, together, we are up to the task. We will continue to support Armenia as it rebuilds in the years to come. As President Biden said on Wednesday – “We have never ever, ever failed in America when we have acted together.” That emphasis on togetherness transcends our borders – together with our Armenian friends and partners, we will tackle the challenges before us, uphold our shared values, and ensure that democracy and the rule of law prevail, leading to a brighter future for us all”.